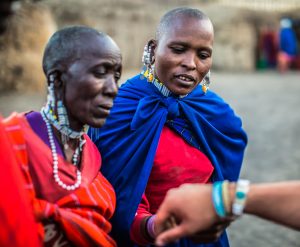 Many of you familiar with current events in the region will know that the area is probably not the safest place to be at present, particularly for foreign travellers to the North of the country.  It is sad that some areas of the world are becoming more closed off to visitors due to war, violence and religious beliefs.  Many, rightly so, will heed government warnings and not visit areas of trouble but there will always be adventure seekers out there willing to make their own rules. Thanks to Nina, a friend of Paulas whose roots lie in the country, she has helped us compile a list of why you should visit this fascinating part of the world.

Australia has Ayers Rock or Uluru, the USA has the Grand Canyon and Mali has the Bandiagara Cliffs! Ok for many they may never have even heard of the former but for sheer beauty the Bandiagara Cliffs are a must see. The Bandiagara Escarpment is an escarpment in the Dogon country. The sandstone cliff rises about 500 metres above the lower sandy flats to the south with a length of approximately 150 kilometres.  in 1989 the escarpment was listed in the UNESCO World Heritage List. Today, local guides can take tourist groups on trips along the escarpment to visit the Dogon villages. A series of trails runs along the cliffs with hostels in each village providing food and lodging.

Cruising on the Niger River 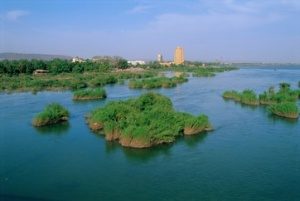 Similar to the above, we have all heard of Danube cruises, cruises along the river Seine in Paris and the mighty Nile River. Africa however possess another gem of the river variety, namely the Niger River. The Niger River is the third longest river in Africa and is a major thoroughfare in Mali connecting Mopti (The Venice of Mali) to Timbuktu. A quintessential experience of travelling in Mali is to take a river cruise to Timbuktu aboard a pinasse – traditional wooden boats powered by engines. On the way you can visit riverside villages such as those belonging to the Bozo, a tribe of nomadic fishermen, view the wildlife of the river including hippos and bird species such as egrets, herons, sandpipers and hammerkops and camp at night on the river’s edge. The real highlight however is simply watching the scenes of life on the river – Fulani herdsmen taking their cattle into the river for watering, boats carrying goods, livestock and passengers down the river and women lining the banks washing clothes. 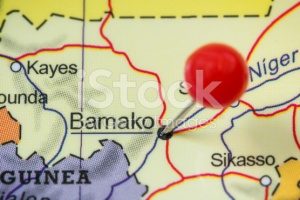 The capital city of Mali and a place we have been told is well worth a visit.  With a population of around 1.7 million, its the largest city in the country and one of the largest in West Africa. Markets are a real draw for locals and visitors alike with art and food markets aplenty. The Bamako city centre market boasts silver, leather (including huge snakes-skin), wood carving (Ebony), beading and even henna-tattooing and eye-lashes extending! It’s busy with local buyers, it’s lively and fun with bargaining expected to avail of great deals.

The Bamako Artisan Market is another draw for market lovers, here you can buy some Dogon masks, wood sculptures, leather and mudcloth bags-in short one piece each of all Malian handicrafts. The shops in the city sell at prices which are fine, but if you want to buy more than a couple of items it’s worth your time to visit the Artisan Market. When all that shopping in a chaotic atmosphere comes too much or if you seek a change of pace you can always enjoy the picturesque sunset over the river Niger or a trip to the National Museum which presents permanent and temporary exhibits on the history of Mali, as well as the musical instruments, dress, and ritual objects associated with the country’s various ethnic groups. 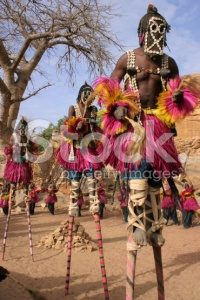 If you like African music and art Mali is the place to be. Blues musicians like Ali Farkar Touré who was a Malian singer and multi-instrumentalist, and one of the African continent’s most internationally renowned musicians. His music is widely regarded as representing a point of intersection of traditional Malian music and its North American cousin, the blues. Touré was ranked number 76 on Rolling Stone‘s list of “The 100 Greatest Guitarists of All Time” and number 37 on Spin magazine’s “100 Greatest Guitarists of All Time”. For lovers of art the works of the native Dogon people are hard to miss. Dogon art is primarily sculpture.

Dogon art revolves around religious values, ideals, and freedoms. Dogon sculptures are not made to be seen publicly, and are commonly hidden from the public eye within the houses of families, sanctuaries, or kept with the Hogon (spiritual leader of the village). The importance of secrecy is due to the symbolic meaning behind the pieces and the process by which they are made.  Many will be familiar with the iconic Dogon mask, with one of the most popular types of masks in the Sanga region known as kanaga. These masks are characterised by a wooden superstructure in the form of a double-barred cross with short vertical elements projecting from the tips of each horizontal bar. Dogon masks rank among the most respected within the world of tribal art collections and have influenced such Western 20th-century artists as Picasso and Braque, even the Cubist movement. 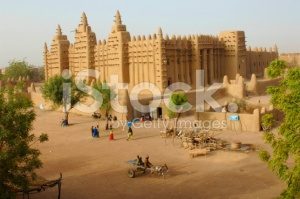 Nina was good enough to give us excellent reasons to visit Mali but she was reluctant to mention the famous city of Timbuktu or Tombouctou.  Unfortunately the city is too dangerous for visitors at present. Once a hub of Arab-African trade, Timbuktu is now a city on the edge – with the desert encroaching, water supplies disappearing, and rebel fighters threatening new attacks. Garrisoned in rebel territory ever since it was seized and occupied in 2012-13 by secessionists and Islamists linked to Al-Qaida, the city is a dangerous 600 mile drive north-east of Mali’s capital.  This West African city long synonymous with the uttermost end of the Earth was added to the World Heritage List in 1988, many centuries after its apex.

Starting out as a seasonal settlement, Timbuktu became a permanent settlement early in the 12th century. After a shift in trading routes, Timbuktu flourished from the trade in salt, gold, ivory and slaves. By 1330, Timbuktu became part of the Kingdom of Mali. Mansa Musa built a great mosque, or Islamic temple, in Timbuktu. The mosque attracted scholars from as far away as Saudi Arabia. Timbuktu began to decline in influence when the Portuguese showed that it was easier to sail along the coast of Africa than travel through the desert. The city was destroyed at the end of the sixteenth century by the war between Morocco and Songhai. At one time, historians estimate that more than 100,000 people lived in Timbuktu,

As stated previously if you wish to take a trip to Mali it is best to check out your government’s latest travel warnings.  Sadly conflict has tarnished the nation’s potential for mass tourism with many governments advising against all travel to northern Mali and the areas bordering Mauritania. One of poorest countries in the world but certainly not poor culturally with people very welcoming, kind, generous and always smiling.  We do hope that peace and stability will come to the region and Mali will become a place high on many traveller’s list.  It definitely is a place we intend to visit in the future so hopefully we will get to sample some Mafé with peanut sauce washed down with a Djablani!

Thanks again to Nina for all your help compiling this post, we both very much appreciate it. Merci beaucoup. 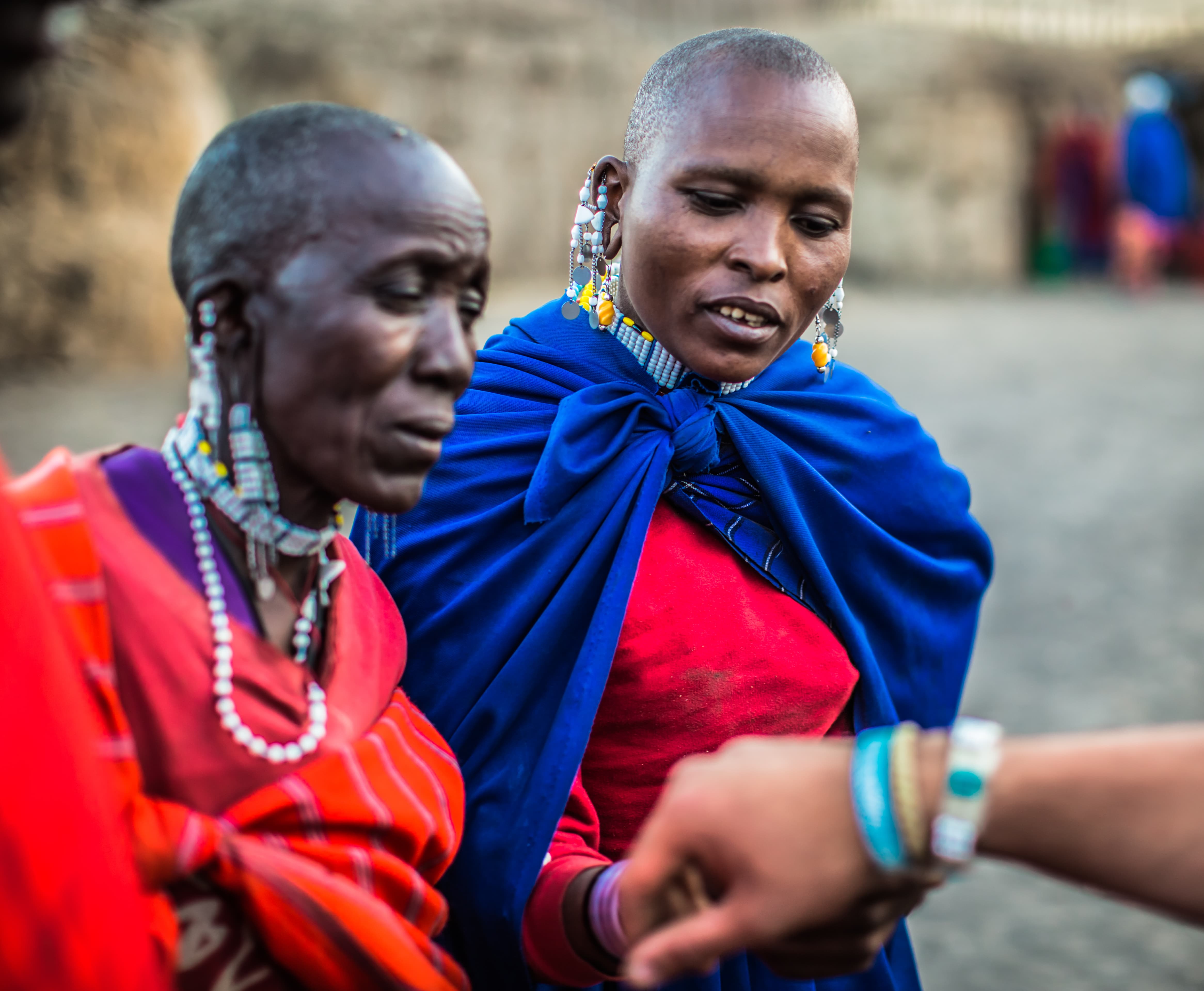