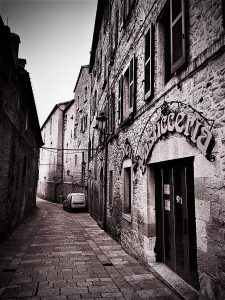 Country number 87 on our world travels and one of the smallest nations on the planet. The beautiful Republic of San Marino may not be too familiar to many, but it is significant for us ticking off the nations of the world, particularly in Europe. It is a destination which must be discovered. As it is the fifth smallest nation in the world and second in Europe (after Vatican City), this place wouldn’t take too long to discover so we got to fit it in on a day trip from nearby Rimini, Italy. Would it be a place little on size but big on character? The Republic of San Marino, our first new destination of 2019! 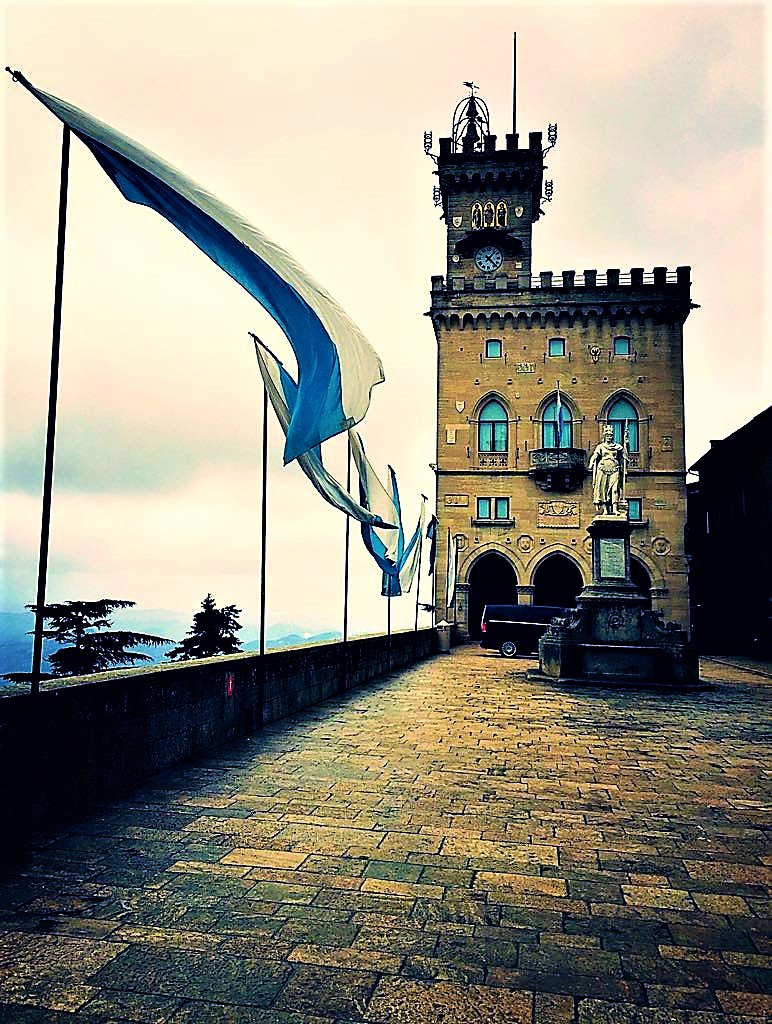 Italy, Spain, France, Germany and Poland. Just some of the well-trodden nations on the European continent. Vast nations which attract thousands upon thousands of visitors each year. Most people know something about these places even if they haven’t set foot in them. Some nations aren’t as well known and many in the general population will not be aware of them. Growing up in the eighties and nineties, the Republic of San Marino was associated with a struggling football team. Rubbing shoulders with European giants, bigger populations and professional players. Alas, they were usually on the wrong end of the scoreline. For such a small nation (population 34,000) to be involved in European and World Cup qualifications is impressive alone.

So for those of you not aware of this tiny nation, Where is San Marino? How do you get to the tiny Republic of San Marino? For us based in Spain our adventure all started with a trip to the Italian city of Bologna. Always on the hunt for a bargain flight, we hit the jackpot when Ryanair offered a direct trip from Alicante to the Bologna for €14.99 euros! Thirty euros per person for a return flight, less than most short hop taxi trips!

As you have read we started our adventure in Bologna. A beautiful city worth a longer stay but a short enough starting point en route to San Marino. After spending a day discovering Bologna on a wet Saturday we plotted our route south to San Marino. The city of Rimini our final destination in Italy before making the final trip to the tiny nation. Fortunately, there are plenty of buses and trains south so we took the one hour thirty minute train for the price of €10 euros per person to the seaside resort of Rimini. 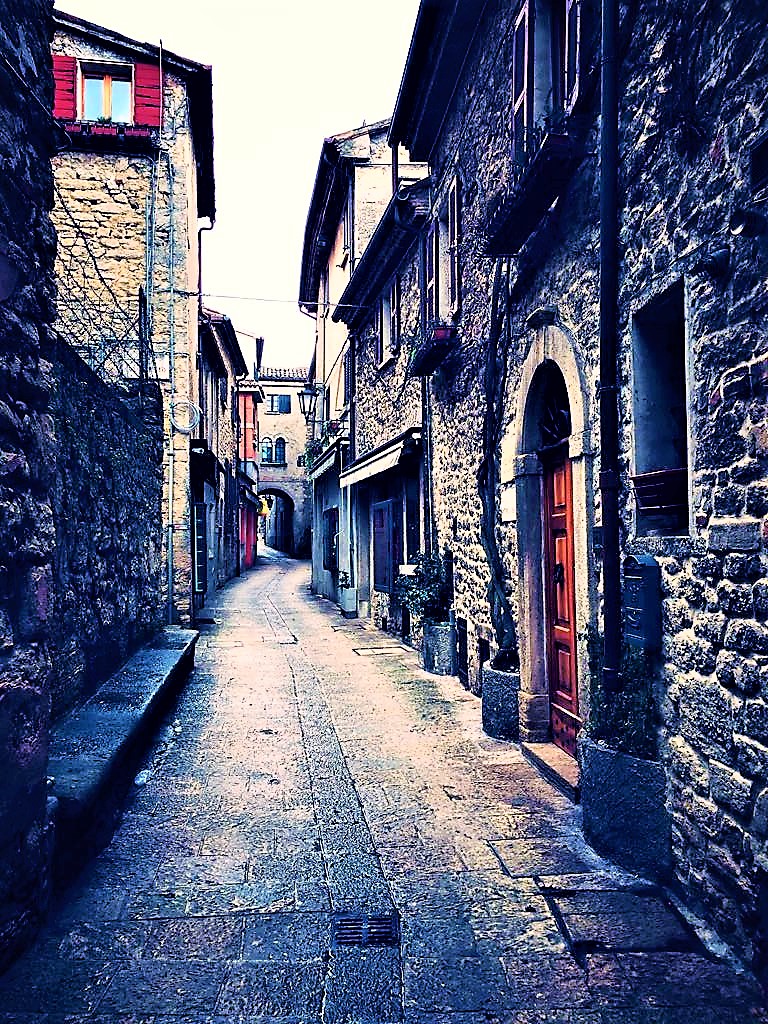 Rimini is a resort town in Emilia-Romagna on Italy’s east coast. It is a place where Italians go for their sun and sea but at this time of year (February) there was little sunshine! Hence, the hundreds of hotels and 15km of beaches were unusually quiet and devoid of life. We enjoyed a stroll around the old town and took a look out over the Adriatic Sea before dining in one of the many quality restaurants. The city was a lovely bonus on our journey, but the real reason for being here was a trip to neighbouring San Marino.

When you arrive outside the main entrance to Rimini train station you will see bus stops and a shop advertising tickets to San Marino. Quite straightforward really! We didn’t pre-book tickets as it is a quiet time of year in the region. This gave us the freedom to go at a time which suited us.  After a lovely day strolling around Rimini we checked out the bus timetable online and walked the short distance back to the train station area to catch the bus to San Marino. We purchased two tickets in the shop for €10 euros per person return so very reasonably priced. Upon boarding the bus we discovered you can buy tickets onboard, so there are options. The bus stop was only twenty metres from the shop entrance so all very convenient. 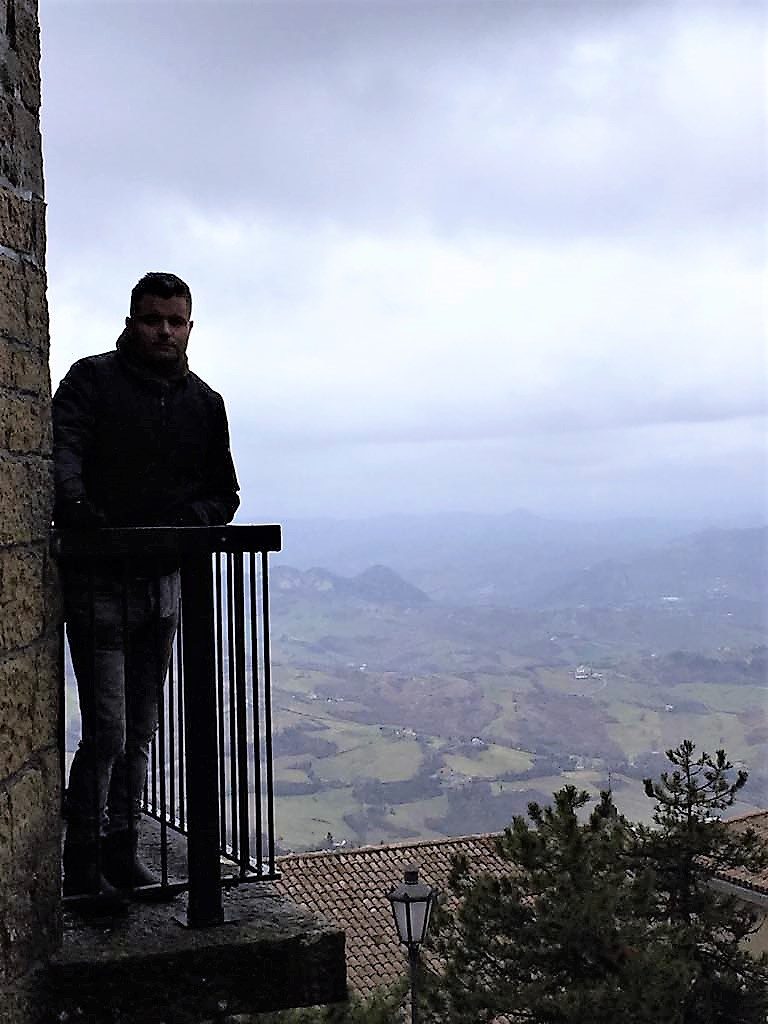 The bus trip was pleasant as we made our way higher and higher up steep mountain roads to San Marino. There were no major signs that you had travelled from one nation to another. Aside from the national flag of San Marino and the Bank of San Marino, there were no obvious distinguishing features. On further inspection we did notice that the vehicle registration plates were different to Italy, and as we were climbing higher above sea level there was a noticeable change for the worst in the weather. After a fifty minute bus ride we arrived at the mountain top which contains the walled city and the three distinct towers which overlook the country. From this vantage point stunning views are usually to be experienced and enjoyed. Alas, our luck wasn’t in upon arrival as a dense fog rapidly descended.

Nevermind it was a chance to get something to eat and warm ourselves up and wait for the fog to clear. We dined in a nice little café where two cups of tea and two bowls of minestrone soup and fresh bread cost twenty euros. The views from the café are spectacular during clearer days, but we had to contend with a vast covering of fog. Steadily it moved its way by to give us a glorious view of the land below.

Only To Be With You! 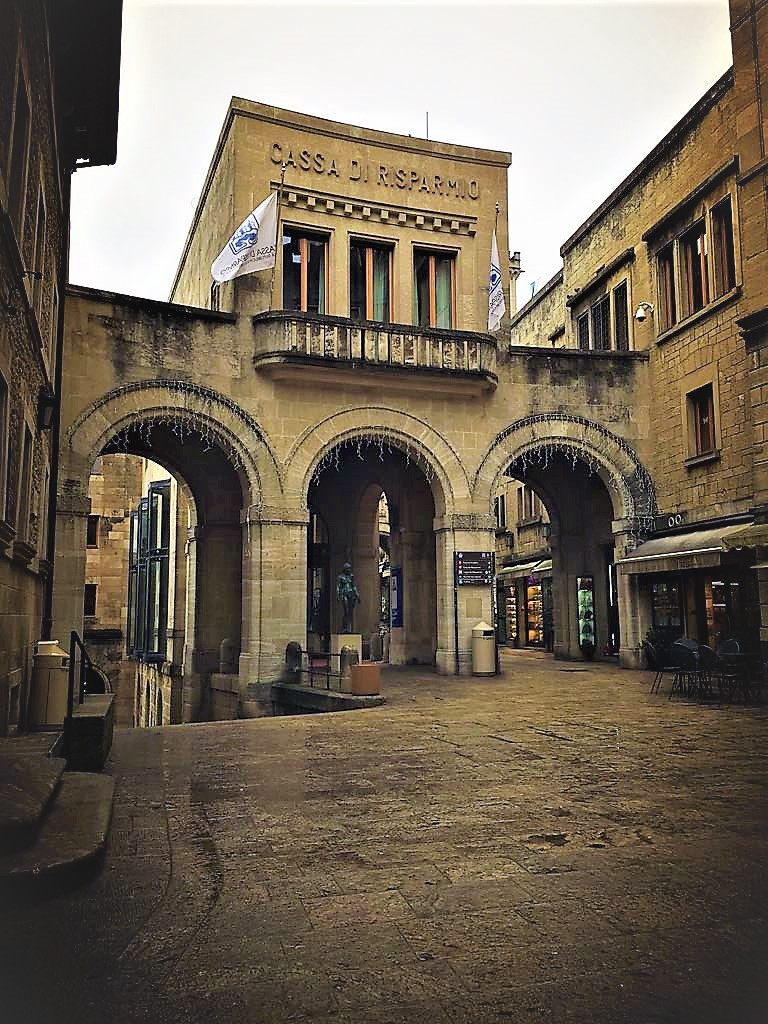 It was then time to explore the walled city with cute cobbled streets fringing idyllic shops and restaurants. Most shops were closed, and who could blame the owners as very few tourists were about. Within the walls you will find loads of little back streets and narrow roads, how locals drive cars around San Marino’s cobbled streets we have no idea, but they do! We were happy, though, as there were few cars and people about and it gave us a chance to explore every nook and cranny in peace.

The cobbled streets meandered their way higher as we passed through the Historic Centre and Mount Titano which became part of the UNESCO World Heritage List in 2008. The silhouette of Mount Titano, with its three summits crowned by ancient triple fortifications, may be seen from many miles away. We slowly ambled around the historic centre taking in Basilica di San Marino (The 19th Century Church that houses relics of the patron saint of San Marino), Palazzo dei Capitani, Palazzo Pubblico, The Three Towers of San Marino,Piazza del Titano, Piazza Garibaldi, Monastery of Santa Clara and the Grand Hotel San Marino. 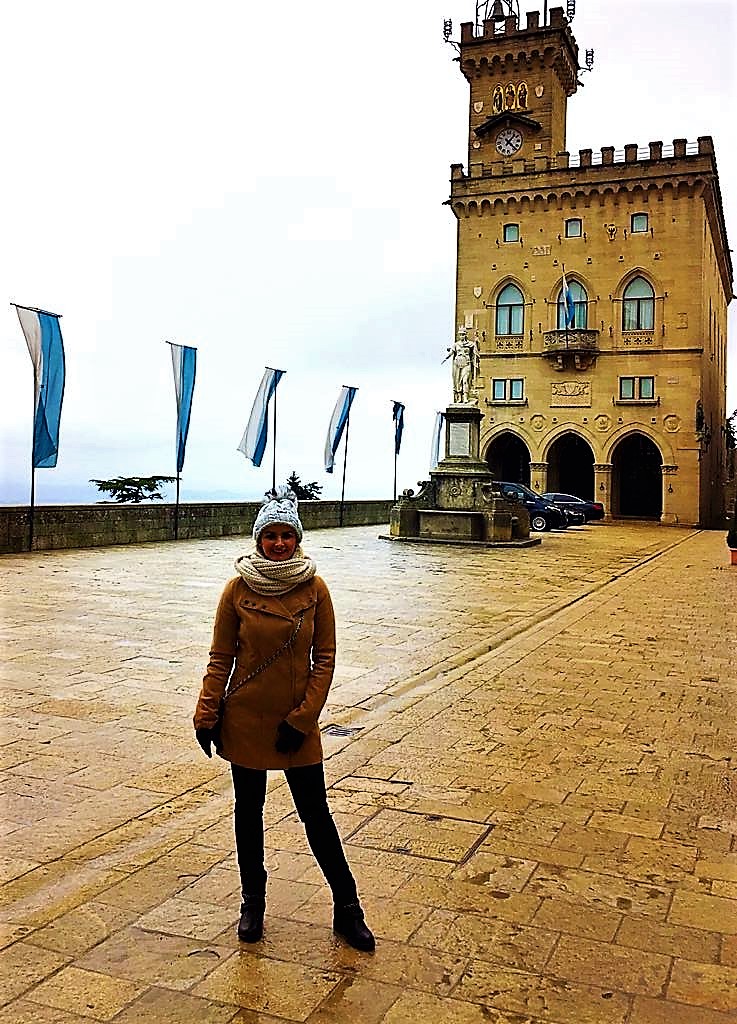 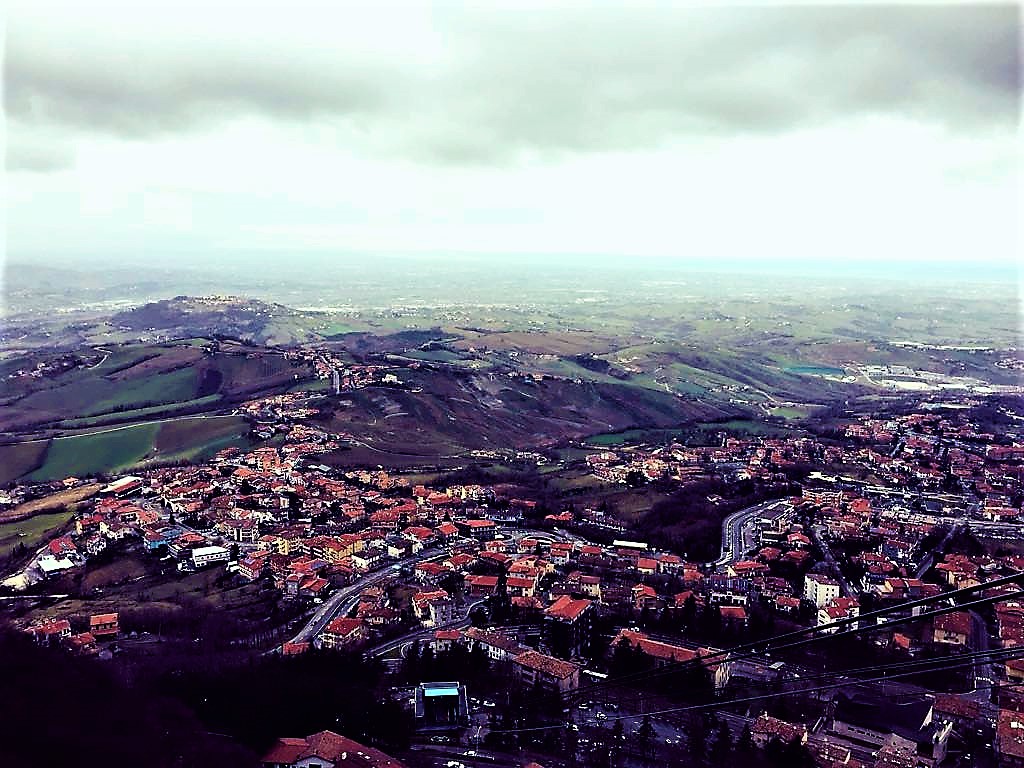 In between all the beautiful classical architectures was a more modern installation. The funivia di San Marino or quite simple a cable car. There were magnificent views from its terminus, but there was no chance I could persuade Paula to make the journey down to the lower terminal in Borgo Maggiore! I think she has had enough of cable cars from our time in South America! As a result we took in the views and the tranquility of an almost deserted capital city.

After taking many shots around the squares and streets we made our way down the slopes to take in some alternative views of the valleys below and the local dwellings. Getting down the slopes is quite easy but making your way back up to the bus stop area was calf-burning! Nothing much more to add to this short but sweet stay. There isn’t a whole lot of world-famous attractions in the tiny nation, but it was definitely a memorable trip. On a clear summers day, this region must be beautiful with breathtaking views out toward the Adriatic Sea. The negative side having to share it with more people. On a chilly February day, it might not have been conducive for long comfortable walks, but it was great to have the place to ourselves.

After a few hours of ambling around and taking in the beauty of the place it was time to take the bus back down to sea level and back into Italy. There is a timetable of the buses in the car park and they are quite frequent so you can leave at a time which suits you. We passed through the towns of Dogana, the most populated town in the Republic and Serravalle before crossing quick as a flash back into Italy. 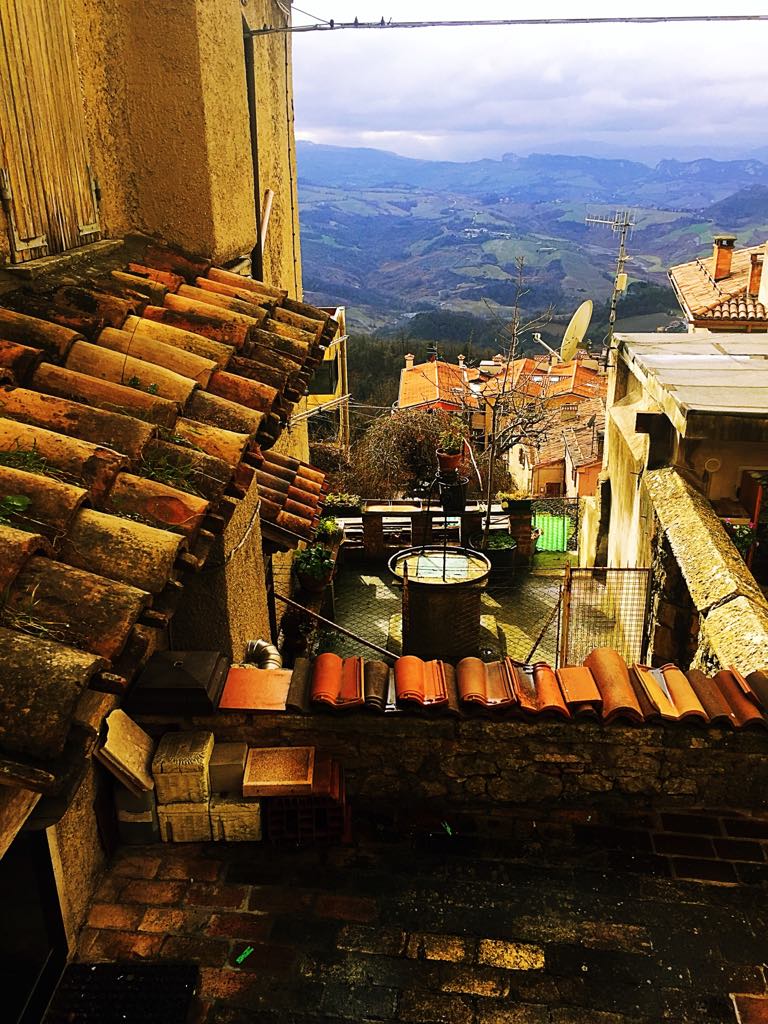 Republic of San Marino Summed Up

Quite simply San Marino is beautiful and perfect for all of you seeking that inspirational Instagram shot. One should be prepared for much walking and don’t expect wild parties or heaving bars. Certainly not in early February anyway! For those of you who love architecture, history and the great outdoors it is definitely a place worth visiting. For those of us trying to visit every territory on the planet, it must be a part of your itinerary, especially if you are on the eastern side of Italy. The Republic of San Marino is much more than a tick on the world map! 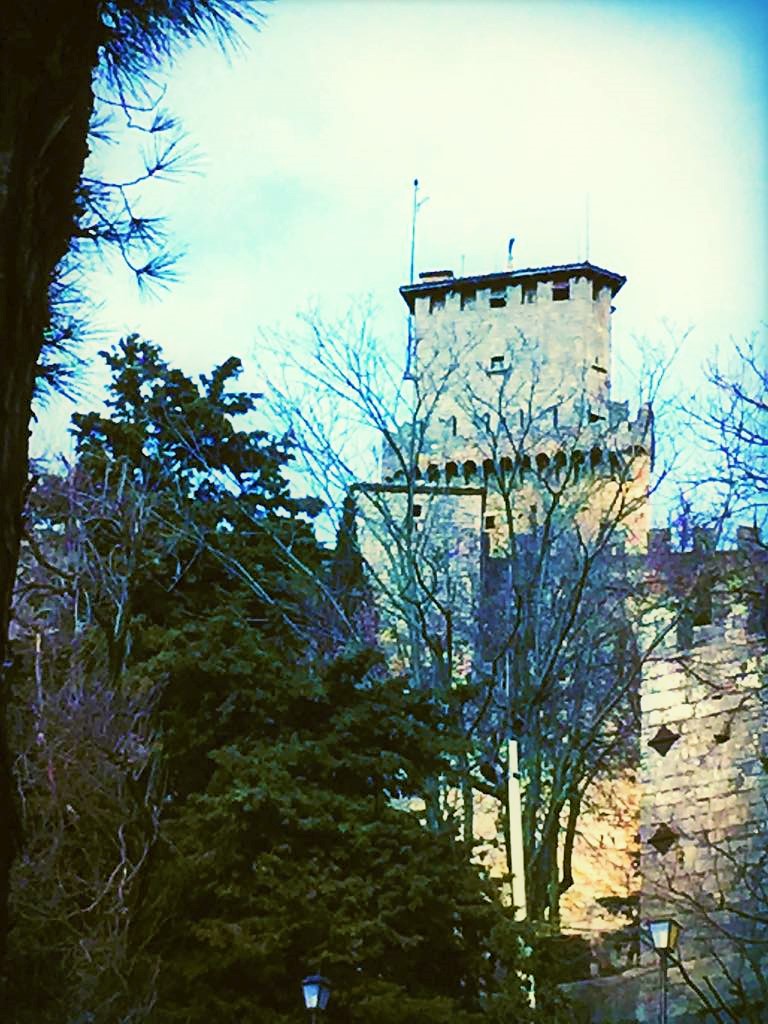 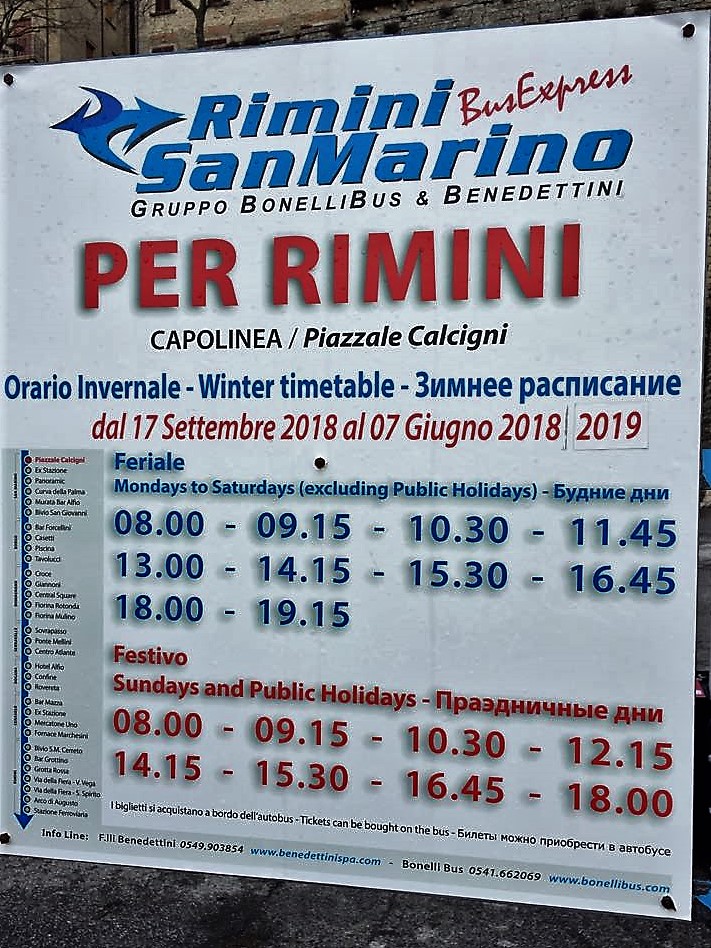